A campaign to promote American flowers and foliage

In 2015, Slowflowers.com creator Debra Prinzing organized the week-long celebration of domestic flowers to raise consumer awareness and unite America’s flower farmers with the U.S. floral industry. In one month that effort generated more than 400,000 social media impressions on Twitter and Instagram, demonstrating the power of images, ideas and values that promote American Grown Flowers. 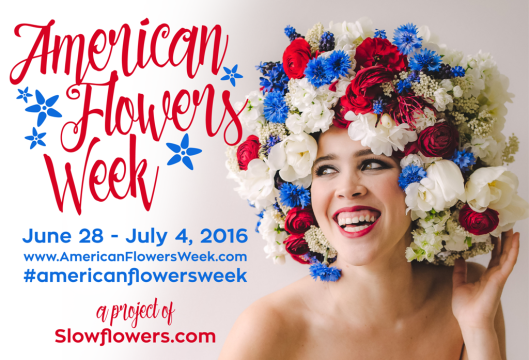 The goal of American Flowers Week is to engage the public, policymakers and the media in a conversation about the origins of their flowers. As an advocacy effort, the campaign is timed to coincide with America’s Independence Day on July 4th, providing florists, retailers, wholesalers and flower farmers a patriotic opportunity to promote American grown flowers.

American Flowers Week supporters can find more information and resources atamericanflowersweek.com. Downloadable fact sheets, infographics and the 2016 American Flowers Week logo and social media badges are available for growers and florists to use for their own marketing and promotion efforts.